Last minute packing, minimal to no sleep (because it always seemed like a good idea at the time) and airport food is the proper way to begin any travel out of the country. This time, I'm somehow wedged between seven other friends, sitting on a bus at 3am, wondering why on earth am I ever allowed to go anywhere without parental supervision, especially if the places I'm going to does not consider English as their national language.

And yet somehow, about 18 hours later, there I was running up and down the corridors of a hotel in Tokyo ringing doorbells then running off to hide behind a vending machine while struggling to breathe and laugh at the same time with Desiree. And another number of hours, plane flight and bus ride later, there we were in Sapporo. And it was snowing a ridiculous amount. Trudging through the snow with our luggages must've looked miserable to the locals.

I spent the next day exploring Sapporo with Jenna. Reading maps with a bunch of Japanese characters was difficult so we decided to just go wherever. Our first stop was the Sapporo Snow Festival. How can a bunch of frozen water be sculpted so perfectly and precisely in such a grand scale?! We also could not help but ogle at all the little kids bundled in clothes like little penguins wobbling around in groups waiting to go on the ice slides. SO. CUTE.

Then we went shopping and the shopping centres felt so endless. Everything was so bright and colourful and the workers there kept greeting us and saying something we didn't understand every few seconds to the point where we didn't know whether they were talking to us so I kept awkwardly side eyeing them, not knowing whether to acknowledge them over and over or not. Everyone here is so nice and friendly though.

Evenings in Sapporo looks so magical. Nights in Sapporo during winter aren't as magical (to me) because of the amount of the bloody snow that fell and coated us. Wearing a parka with a hoodie that literally covers half my face was only slightly advantageous in this weather. I've never wanted to be indoors more than I did in that moment. And yet I still wanted to buy a small tub of ice cream from the convenience store. How could I say no to trying sakura flavoured ice cream?! (And I also could not say no when Jellee demanded me to get out of the shower so I could try her rose flavoured ice cream...)

Even though we technically only had one full day to get ourselves acquainted with Sapporo, I think it was enough for me because snow is so bloody cold to the point where my body temperature dropped so low that when snow fell on me, it actually stuck to my skin and did not melt. I do love winter, but I guess I found my limit of what's considered a pleasant kind of cold.

PS. I know this is a very delayed post and I haven't posted anything in a while. New uni and course happened so I've been super busy. I have a lot of travelling posts to catch up with and books I've been reading so stay tuned, I suppose?
Posted by Rebecca at 17:00 3 comments:

One of the things I've always wanted to do is to live near the typical American woods with woodland creatures bouncing around and hearing the slow current of a nearby creek and a woodpecker hidden in the trees while I stroll down a worn path. Like just imagine all the animals you'd come across - Squirrels, bunnies, raccoons, deers, foxes, hedgehogs, owls and beavers... I AM EXCITED JUST THINKING ABOUT IT. I don't know if these kind of places exists, but it seems to in kids' cartoon shows. I will even become an animated character if I have to just to experience this.

We woke up still undecided of whether to Orange or Blue Mountains. In the car, we still had no idea where to go. Then finally at the last turn, we decided to head off to Blue Mountains. I guess the Australian bush is the closest thing to the American woods.

We stopped by Knapsack Bridge because we've never been and was curious of what's there. The area is now an abandoned railway station with a bushwalking track. The first thing you'd notice when you get out of the car is the cacophony of birds and insects constantly screaming. At one point it got so loud that it reminded me of mockingjays from The Hunger Games trilogy.

My fitness level is shamefully nonexistent so I was panting and crawling up the stairs after less than a minute of walking. Apart from the constant fear of getting an asthma attack, which I don't have asthma in the first place, I had to also worry about my camera, my bag and the uneven steps with no handrails with the constant unsettling thought of falling over the edge and deep into the forest floor. I kept telling myself I would start going to the gym, but I think my need to sit in front of my laptop, watching British YouTubers all day, overpowers every other need.

Wentworth Falls was our next stop. Another walking track meant another lot of unfulfilled goals made to myself. "I can't breathe. I think I need to go to the gym. But wait, how much does the gym cost? What? I'm not paying for that. Why would I go pay to sit and touch and run on other people's sweat? Isn't that unhygienic? Will people judge me if I lie on the floor after thirty seconds on the treadmill?"

Last stop was The Three Sisters at Blue Mountains. We didn't do much because by the time we got there, the tourist activities were closing. It was still a really fun family road trip though and worth the long drive!

A two day road trip with my family to Hunter Valley to end the s#!ttest (synonym: poopiest) year of my life by far, 2013. Even though there's not much to do there because the area mostly attracts avid wine drinkers with its extensive vineyards and wineries, we all had heaps of fun just knowing that we were 3 hours away from Sydney, and a change in scenery is always exciting.

We didn't do any wine tasting, but did a whole lot of fast food eating. Actually, we kind of spent our time there doing elderly things like strolling through gardens and playing putt putt by the lake. I made dad stop driving every few metres because the view here is so picturesque. The good thing is that there are hardly any cars around so we could stop in the middle of the road and I'd stick my head out the window like a dog then take photos.

An attraction there are the Hunter Valley Gardens during Christmas. Each garden had a theme and at night, there would be Christmas lights and a whole lot of festive music. The whole area felt like there were singing gnomes hidden in the hedges. (Also got told off because there was this blocked off entrance to one of the gardens and there were elephant lights basically greeting me at the gates and I really wanted to see what was in there and a worker caught me after taking two steps. At least we know somebody's not sleeping on the job.)

Stayed at a motel for the night and watched weird things on TV (like how this guy was addicted to eating glass...), had instant noodles and fought for the single beds - The typical stuff. On our second day, we did a bit of chocolate and confectionary browsing at a few stores that looked like little barns and cottages. 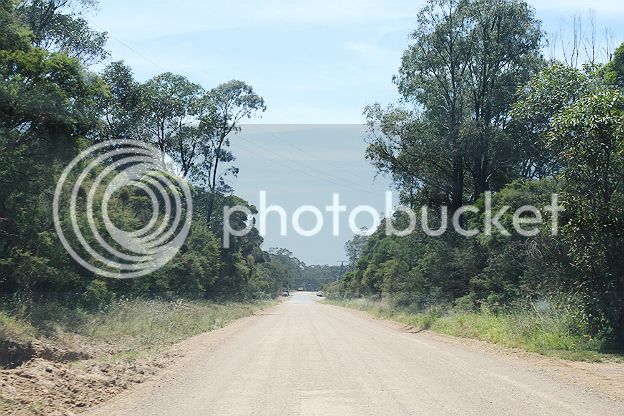 We stopped by The Entrance on our way home and went to the beach. The water is really shallow so it looks like there are small islands where people can also go fishing. There is also a fair nearby where I painted a ceramic dragon and ate a lot of cinnamon doughnuts.

Look at the amount of power that lady has. Look at how hypnotised the pelicans are. If you have one fish in your hand, you can control an entire population of pelicans. It's almost abnormal to see how behaved they look, until the fish is thrown into the air and they all become chaotic animals again.

In summary, a successful road trip because no one got sunburnt in 30°C+ weather! *raises glass full of sunscreen*
Posted by Rebecca at 23:58 14 comments:

For someone who claims to despise the beach, WHY HAS MY FOOT MADE CONTACT WITH SAND THREE TIMES THIS YEAR? THIS IS NOT OKAY. I was on the verge of threatening to shave all my hair off because I was eating my own hair due to the wind whipping it into my mouth. My temper level is at an all time high when I'm at the beach.

Highlight at the Korean BBQ buffet would be Vivienne's odd creations - Grilling watermelon and mixing ice cream and yoghurt together. It was strangely... nice. Then we drove around looking at houses covered in Christmas lights. There were these two particular houses that were insane. Their lights and decorations were flashing in sync to songs played on a radio station. All nine of us sat in a row, on the curb, watching for a long time with sleep washing over my eyes. It was a nice moment, minus the mosquitoes.

While driving to all these places, I got to be pick the car music. I realised that my friends haven't heard of the kind of music I usually listen to, which made me think, Australian indie pop/rock and alternative bands don't get enough recognition, both in and out of the country. So here is a playlist of my favourites. There will be bias involved because I saw The Jungle Giants a couple of months ago.

I am usually the type to stand in front of my chosen scene then wait for everyone to walk out of the range of my shot no matter how long it takes to get the "perfect" photo with minimal people in it. Or sometimes I would go to the extent of editing stray people out of my photos because I think they "ruin" my shots.

Brandon Stanton is my favourite people photographer because he makes me want to take photos of complete strangers, ask about their life stories and hang onto every word they say.

Humans of New York is a compilation of Brandon Stanton's photos made into a book. He basically goes around taking photos of people on the streets of New York then asks them a simple question or strikes up a casual conversation then captions his photos with quotes from these ordinary people. He then posts his pictures daily on his Tumblr and Facebook that I read everyday like a morning paper (except I don't read morning papers). We get a little window into these strangers' lives and I really like how real it feels.

I think my favourite thing about Humans of New York is that it shows everyone has a story and they're not just another mundane person living their mundane life doing mundane things. (My overuse of the word 'mundane' made that sentence sound mundane towards the end. But you get my point?)
Posted by Rebecca at 00:53 5 comments:

Email ThisBlogThis!Share to TwitterShare to FacebookShare to Pinterest
Labels: books
Older Posts Home
Subscribe to: Posts (Atom)
The Daily Prophette run by Rebecca. I am a 20 year old university student from Sydney who constantly mutters about the cost of film and can often be found in my pyjamas. I tend to word vomit and photo dump on this space.
New post updated 8 days a week.